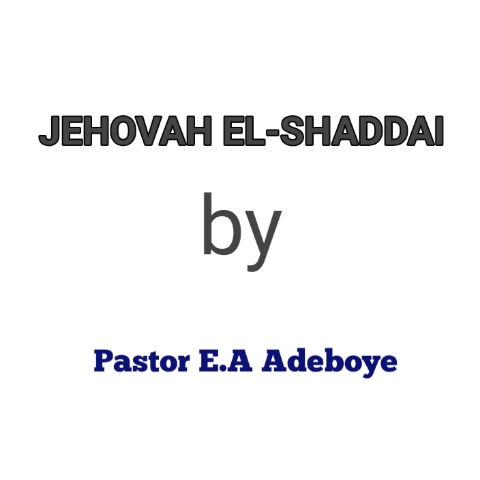 Jehovah El-Shaddai has been translated in several ways to mean God Almighty or the God that is more than sufficient. Actually, it means, “God the Breasted One”. You all know what the breast of the mother is to the child. It means where the child can draw and draw and it will never finish. No matter how much you want from the Almighty God, He is more than Sufficient.

When God was introducing Himself to Abraham in Genesis 17:1, He said:

“And when Abram was ninety years old and nine, the LORD appeared to Abram and said unto him, I am the Almighty God; walk before me, and be thou perfect.”

If we are to go to the Atlantic Ocean today each one of us with a tanker, and we all fill our tankers with water, by the time we finish, the ocean would not know that anybody has paid it a visit It does not matter how many miracles you need right now, by the time God has supplied all your miracles, He will still say to you, ‘Is that all

This our God can make the barren fruitful. The Bible says in I Samuel 2:5 that He can make the barren to become the mother of seven God told Abraham when he was still considered barren that He will make him the father of a multitude of nations. This God that I am talking to you about is the God that can do absolutely anything,

He can heal the sick, any form of sickness or disease. The Bible says in I Peter 2:24:

“Who his own self bare our sins in His own body on the tree, that we, being dead to sins, should live unto righteousness: by whose stripes ye were healed.”

Not only can He heal you, but He can also even fill you with so much health that anybody you stumble upon will receive healing. God does not want you to be sick. He wants you to live in divine health. He said in His word that if you will hearken diligently to His voice and obey His commands, He will bring none of those diseases that He put on the Egyptian upon you He said, because “I am the Lord that health thee.’ Ex15:26)

The Bible says when Moses was. one hundred and twenty years old, his eyes were bright and his natural forces were We weak He was a vigorous man at one hundred and twenty Do not let the devil deceive you that because you are already over a city that is why pain and aches are coming. My God says He shall renew your strength like the eagle (Is.40:31)

He can heal others through you. He said these signs shall follow them that believe, in is Name they will lay hands on the sick and they shall recover (Mark 16:18.)

Not only can He make the barren fruitful and heal the sick, pay your debt, no matter how much you on 2 Kings 4:1-7 tells us the story of a woman, a widow, who was so heavily in debt that the creditors came and wanted to sell her two sons to cover her debt She ran to the man of God who asked her what she had in the house. She said she had only a bottle of oil but had neighbors who could help with empty vessels. The vessels were brought together and she began to pour the oil. The God we are serving kept on multiplying the oil. This woman sold the oil, paid her debt, and for the rest of her life, she never borrowed again

Not only can God pay your debt, but He can also make you rich. The Bible says in Genesis 13:2 concerning Abraham

“And Abram was very rich in cattle, in silver, and in gold.”

God made Abraham very great He had a lot of silver, a lot of gold, menservants, maidservants, ashes, and camels If Abraham is our father, the father of faith, and he was that rich, then there is nothing wrong with those of us who say we are the seed of Abraham if also we want to be rich. The Bible tells us that Isaac became so wealthy that he became the envy of a nation. In fact, the plan of God for you according to Deuteronomy 28:12 is that you are to lend to nations. I know what it is to be a poor man. I have been poor before and I am not going to be poor anymore. I know what it is to need money for the work of God and be without.

God can help you pass your exams. Some people do not know that God is interested in students. He said in James 1:5:

“If any of you lack wisdom, let him ask of God, that giveth to all men liberally, and upbraideth not; and it shall be given him. Not only can He make you pass your exams, He can make

sure you are always first. In Deuteronomy 28:13 the Bible says:

“And the LORD shall make thee the head, and not the tail; and thou shalt be above only, and thou shalt not be beneath;  if that thou hearken unto the commandments of the LORD thy God, which I command thee this day, to observe and to do them.”

“And the LORD God said, It is not good that the man should be alone; I will make him an help meet for him.”

If God says it is not good to be alone, then He can solve that problem. Actually, do you know that Adam never prayed for a wife? He did not even know that there was anything called partner. God can even do more than get you a partner. He can give you a partner than will become a king or even a President. That was what happened to Esther. God can use you to save a whole nation.

Not only can God do all these things for you, He can give you great spiritual power. This God that we are talking about is able to give you tremendous spiritual power. In Acts 3:1-8 the Bible tells us that Peter had the power to touch a lame man and the lame man began to walk. But then God can move from healing by touching to a special case like we have in Acts 19:11-12. The Bible says God performed special miracles by the hand of Paul that from his body aprons and handkerchiefs were taken to the sick and they were healed and demons departed from them.

Why is God able to do all these?

The same was in the beginning with God. All things were made by him; and without him was not any thing made that was made.”

Now because He made all, therefore He owns all. Psalm 24:1 says:

“The earth is the LORD’s, and the fulness thereof; the world, and they that dwell therein.”

“Behold, I am the LORD, the God of all flesh: is there any thing too hard for me?”

“But our God is in the heavens: he hath done whatsoever he hath pleased.”

He has the ability to do everything. He made all things, He owns all things. He controls all things but then He does as He pleases and I believe it will please Him to do my own.

ALSO, READ All Power Belongs to Him by Pastor E.A Adeboye

Continue Reading
You may also like...
Related Topics:CHRISTIAN MESSAGES